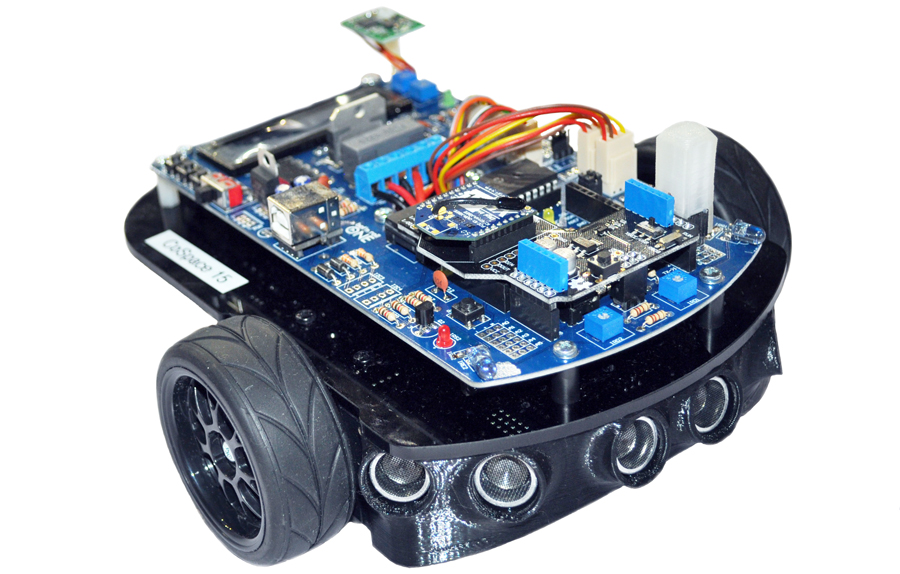 The CoSpace Software is a great tool for teaching programming to beginners using a user-friendly graphical environment. It is freeware and encourages users to improve their skills as it allows advanced users to program in C# (C Sharp) as well. The software is already being used by educational institutions in more than 34 countries including UK, Germany, Mexico, South Korea and Singapore.

In CoSpace Rescue (secondary), one must program a virtual robot and a real robot using CoSpace software to detect and “collect” colors in the floor. The robot moves in an area surrounded by a yellow line where there are obstacles, traps, deposit areas, etc. The video explains it in detail!

Bot'n Roll ONE A robot

Bot'n Roll ONE A is an educational robot designed for beginners, which allows teaching in electronics, mechanics and programming using Arduino IDE. The robot is supplied in parts and must be assembled by the user, according to the manuals. To those who only wish to program it there is also a fully assembled and tested version available.

Bot'n Roll ONE A has proven to be very robust and has a very important educational component. Making it compatible with the CoSpace software was a natural and easy step (RoboParty@RoboCup2014). botnroll.com and CoSpace teams got together and came up with a challenge: Can we make Bot’n Roll ONE A the official robot for CoSpace Rescue in RoboCup2015? The challenge was on and the work began! botnroll.com has to adapt the robot according to CoSpace Rescue requirements. On the other hand the CoSpace team had to incorporate the physical model of the robot in the CoSpace software. Finally, both teams agreed on the communication protocol to make it all work together. In addition to the requirements already covered by Bot'n Roll ONE A as motors, compass, LCD, XBee wireless communication, it was necessary to equip the robot with two RGB color sensors, three sonars and an RGB LED. botnroll.com team decided this new sensors should be read intensively but without compromising the overall processing power neither occupying the robot´s Arduino ports. Moreover, it should be possible to insert the new features without changing the actual robot´s physical structure.

The solution for all this specifications is an I2C device with a dedicated processor and an Arduino library for communication between the robot and the device. A 3D printed structure resembling a bumper was designed to accommodate 3 sonars, 2 RGB color sensors and the processor. It is also possible to attach a line sensor to this new structure in the front of the robot. 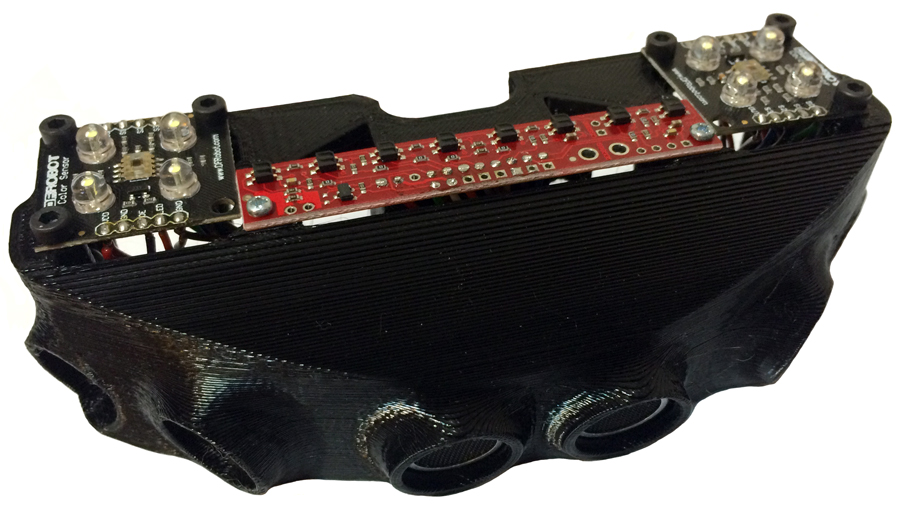 The three sonars displaced by 45 degrees angle from each other cover a total 140 degrees field of view in the front of the robot. RGB sensors get new readings every 3 cm when the robot is moving at the maximum speed.
In normal operation the Rescue Module device repeatedly reads the sonars and color sensors. Using I2C communication, the main Bot’n Roll A processor can access data from the latest readings:

Bot'n Roll ONE A was intensively tested with the new Rescue Module for CoSpace against the technical specifications and a final performance report was generated. Some units of the new robot were sent to Singapore so that the CoSpace team could also test it and proceed with their development.

In November 2014 two members of botnroll.com team traveled to Singapore to work on the communication protocol between the robot and the CoSpace software. After spending about 10 days working together with the CoSpace team at ARICC lab of the Singapore Polytechnic the Bot'n Roll ONE A was made fully compatible with the new Rescue Module for CoSpace. 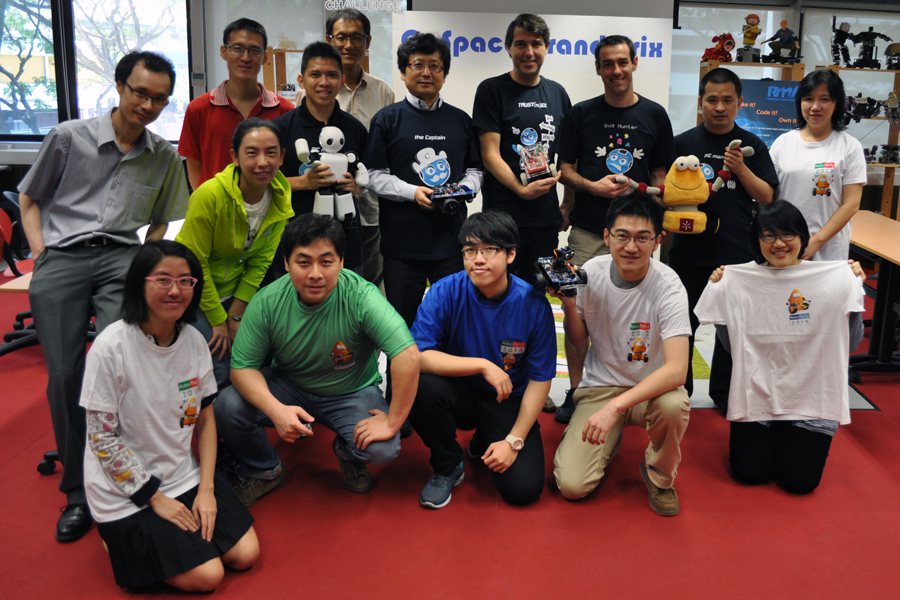 In January 2015 it was decided that Bot'n Roll ONE A with the new Rescue Module for CoSpace would be the official robot for CoSpace Rescue league in RoboCup 2015! 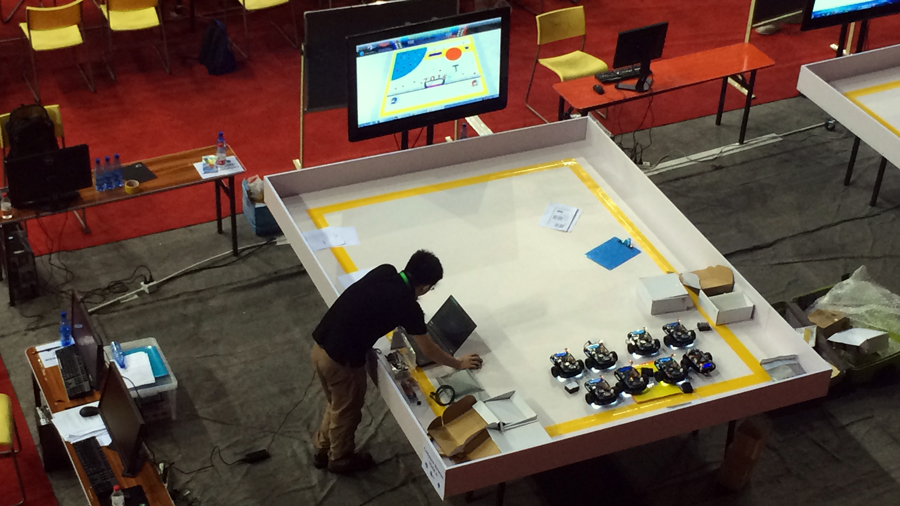 The competition went smoothly and without any problems. A member from botnroll.com team was at the event for support but no problems were reported. We got very positive feedback! Teams loved working with the new CoSpace botnroll.com robot. 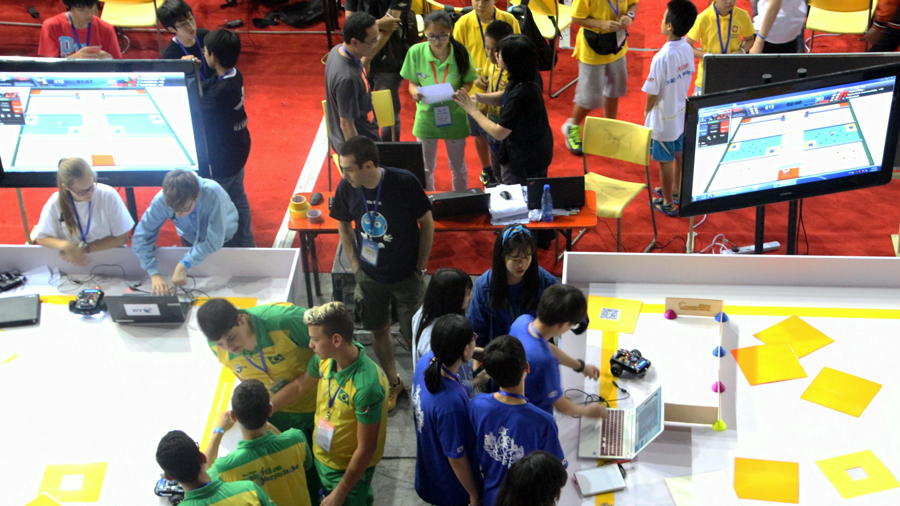 Although never working with Bot’n Roll ONE A before, all teams managed to program the robot for the competition. “Mission accomplished” for both CoSpace and botnroll.com teams! It was a good feeling to see two excellent educational products combined and contributing for youngsters education in a technical area where the first approach is simplified by blending high-level intuitive software with simple and robust hardware.

BnrRescue library for Arduino allows the interface between Bot'n Roll ONE A and the Rescue Module for CoSpace. Code examples for reading the sonars and RGB sensors are included.

Note: This library is not necessary if you are using the CoSpace Rescue software!

Rescue Module for CoSpace is available online at botnroll.com.
It is easily assembled in the front of Bot'n Roll ONE A using four screws. It must be connected to one of the I2C connectors available in the robot!